JungleMaster doesn’t have any “Chrome”. I think we’re made out of something more like cast Iron. A Canadian friend of mine says Cast Iron is, “The American Wonder Metal”. Maybe that’s not a great analogy, but what we don’t have is anything that tears at the heart of the average North American Christian. Sad to say, but for the most part all we do is church plants and leadership training. 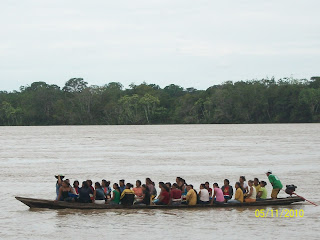 Deep in the jungle there isn’t any orphans; families take care of extended members. People aren’t starving; in the jungle everything you need to survive is either growing in your back yard, swims by in the river or walks by in the jungle. These are the things that cause us to jump in and throw our resources to fix the problem.

Training a 50 year old jungle pastor to become a missionary is not very glamorous, (unless your a 50 year old widower). Self-sustaining mission centers only are exciting to book keepers and economists.

with your blood you purchased men for God from every tribe and language and people and nation.” Revelation 5:9

Yet what we’re doing will produce missionaries to extend into the deepest reaches of the Amazon. Its estimated that there are at least 150 unreached and un-contacted people groups in the Amazon. So who is it that will reach these people? It won’t be you or me; we don’t do well in the jungle. It has to be them; those that live there now. So how will we ensure that those tribes are represented? We need to empower and send. Thats what we do, not too shiny….but solid, like cast iron.