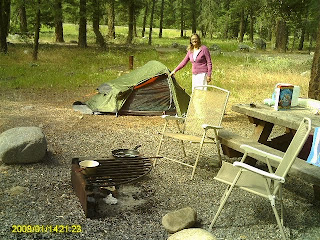 Today Janet and I are celebrating our 30th wedding anniversary, last week we began to think we should do something special but there were a lot of obstacles in our way. Over the week God took our “Perfect Storm” and created a “Perfect Calm” …..Our daughter Tessa had cheer camp from Thursday to Saturday, I finished a bunch of projects on Wednesday that allowed us to pay our bills, one customer gave me an extra $200.00..that gave us a bit of extra cash, we owned a tent and we guessed that we could go camping for the same amount of money as staying home plus a bit of fuel and 8 bucks a night at the National Park. So that was it; we went camping for two nights for our 30th and we went to Mazama (as it sounded a little like Mazatlan, it was a bit exotic too).

As we were loading the truck, Janet and I decided to make this a ministry trip too and we prepared some of our handouts and committed to stop at every church we spotted along the freeway. Our first Church was the Valley Baptist Church in Sedro Wooley. We pulled into an empty parking lot and I jumped out secretly hopeful that no one was there and I could just drop the stuff off and run. I grabbed the handle of the door but it opened so unexpectedly that I found myself standing in the office area of the church. Within a couple of seconds a frazzled guy with a cell phone stepped into the hall and gave me this really skeptical look.

“Hi, my name is Tom Clark and I’m a missionary in the Amazon, I know you get a lot of this…..” I was cut off by Pastor Mike,

“Yes we do and I’m really busy now, could you drop your stuff off, I’m in the middle of a problem right now could you please?…”

“Sure no problem” I said, “Tell you what brother, we’ll be praying for you as we drive east too” 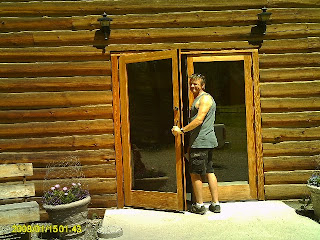 I left him with our stuff and didn’t get a mile down the road before I realized that God had called us to make this a ministry opportunity too. It wasn’t about us dropping our stuff off but about us seeking the needs of these guys that served in the small churches in rural communities. We prayed for Pastor Mike as we pulled into the various churches we saw, some were empty, some had VBS going, when we reached Concrete we found the “Community Bible Church”,… Pastor Rob was outside helping his daughter get the lawn mower going. I stopped and introduced Janet and myself and even offered to help him fix his mower. He graciously declined yet we drove off realizing that these guys serving in the community churches were the heroes of the faith. Without big staffs and lots of help they did the preaching, mowing and painting all on their own.

Janet and I continued to stop and leave our information packet and we stopped at 12 churches over the two days to Mazama and back. The second day we realized that on one of the stops my cell phone must have fell out of the truck, after thinking it through I realized that I lost it in Marblemount. The phone has all my contact information and it would be another huge loss to us, second only to the computer that was stolen out of our house two weeks before. We were heading to Winthrop when Janet noticed she had a voice message, “Hi, my name is Jimmy and I found your phone at the Marblemount Chapel, I’m bikin to Idaho and I……..(we were cut off)

Janet and I figured that Jimmy must be coming through Winthrop and if he was making time he should be there about the same time we were. We went to town looking for someone that looked like a Jimmy with a southern accent, everyone looked like Jimmy at that point………..

On the way back to Mazama Jans cell phone rang again, “Hi, my name is Jimmy and I’m just doing the Lords work. I have your cell phone and I need to get it back to you” 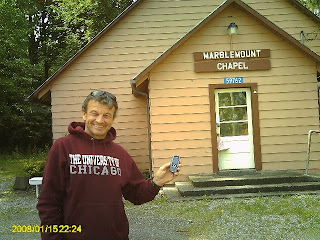 We spent several minutes making arrangements for Jimmy to leave the phone at the Shell station in Marblemount and thanking him for helping us out. We explained to him how he was helping a brother in ministry and how he was being used by God.

When we lost our phone God had one of our brothers who was committed to doing “His work”, ready to cover our backs. When we were we pulling out of Marblemount, God had His man Jimmy peddling in….

I guess that whether we’re on vacation celebrating an anniversary or biking across the State of Washington, we can be doing “ministry” every moment, its an eternal perspective that I need to be thinking about or I just get lost in my busyness….But that’s what we are called to do…., No?

Yes, Jimmy was doing the Lords work, Thanks Brother!