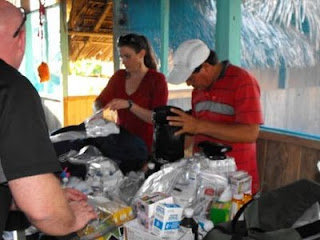 Sorry for the delay in getting this post up, I was able to use the satellite phone as a phone but every time I tried to get it to work as a modem, my computer would lock up. I worked on the issue while in Dos de Mayo but with all the issues we were having I didn’t want to waste batteries in case things really fell apart.

So here we go, this is the updates as I wrote them while up river…..

Even as I write this, Alivia and the Doctor are working to help a baby from Santa Rita with the flu….Its a little tough with a language barrier but we are working though the issues step by step.

Our boat ride to Santa Rita went really well, The trip from Nauta took just 3 hours! We were a bit over-loaded but beyond that it went well….

By the time we left Iquitos we were on our third Doctor, # 1 broke his leg, # 2 had to work all night in the hospital and couldn’t leave, but # 3 was just the guy we needed. Doctor Antonio is connected with the Health system in this part of the jungle. When we arrived in Santa Rita the 1st Doctor had left town to get his leg set, but he didn’t talk to the nurses at the clinic and give them authorization to release the medication that we had purchased. She required us to phone the number two guy in the medical system to get authorization to take the meds. It just so happened that Antonio knows the guy and has been up river and had the required level of background that the “head Doc” told the nurse to give “JungleMaster” whatever they needed. Problem solved! The “wrong” guy was the right guy to have when things went south. Thankfully no complications so far……..

At 8am we leave for Dos de Mayo, we have our permit, Meds, cook and Doctor. Our goal is to reach Hamburgo aka Check point 6. We’ll stay the night there and head for Dos de Mayo the next morning, about 3 hours up river from there.

Pray for safety and Logistics.

We now have our Peruvian nurse, Doctor Antonio and the medicines loaded on the boat and ready to go.

Last night we were discussing fuel and consumption; with the information we received, realized once again, that we didn’t have enough fuel for our expedition. We ended up purchasing an extra 55 gallons in Santa Rita and loaded up a canoe with the fuel, to run it up river to drop off it as a back up. Once we are returning from Dos De Mayo we will be able to pick the fuel up on the river bank and refuel the boat. The fuel issue was a big point of argument on who knew what, how much the engine burned per hour and how far we had to go. The fact is that I know boats, Ed Alm has a GPS and he had mapped out just how far we had to travel using Google Earth. By the end of this journey I think we’ll know who was right….. 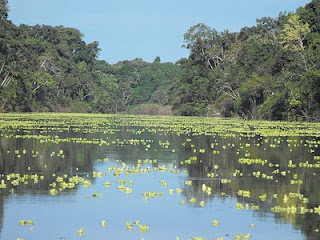 I’m writing this in the boat and we have just past Check point one, the river is chocked with Lilly pads, slight over cast and it’s relatively cool for the jungle. The jungle here is dense, so much so that it would take a huge effort just to travel inland a few feet. Trees along the river form a barrier wall to anyone trying to penetrate into its depths, it’s like a 100 foot tall wall, backed up with a footing of impenetrable brush all entangled as a solid surface. Even Home Base doesn’t have enough green paint samples to cover the multitude of colors along the river. The further we travel, the narrower the river, once we reach Dos de Mayo it will only be a few yards wide. Check point two is just a few miles ahead, more soon I hope.

At check point 3 we picked up a Park Ranger to guide us up river and offer a little extra layer of protection.. …IRENA; the park protection service had used the shortwave radio to call the check point and made, as a requirement for us, to take our new passenger “Israel” with us. 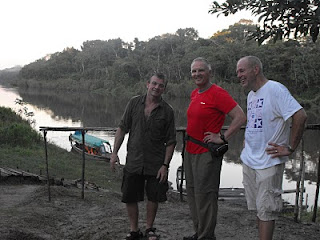 Now late in the day; we only made check point 4, but we were able to get in early enough that we could get settled. This check point has a bunk house and a facility for visitors, other than the ranger had just used a few gallons of gasoline to kill bugs by spraying it on all of the floors it was great, but we elected to use the other “bug filled” house to hang hammocks in and pass on the bug free version.

Everyone is doing great, Thankfully; no problems thus far…

Leaving at 7 am we are making good time, the motorista continued to slow down and not until later did we discover why.

At check point 5 we passed our fuel boat (they had traveled all night) This later would prove to be a bad idea. But we made it to Hamburgo with no issues.

Hamburgo to Dos de Mayo should have been two hours, the motorista had slowed to 15 mph and we were sneaking up on three hours when we started to have issues, twice the engine died before it finally died with just a mile to go. It soon became apparent that the motorista lied to us about how many gallons of fuel we had started out with and that we were painfully short of fuel. It may be 1 mile to Dos de Mayo but we were 390 miles from civilization……

I jumped to the rear of the boat to take over the control of the issues. All of the operators of the boat said there was “NO” more fuel as I yelled back to them that there was always more and we needed to pour everything together in one small diameter container to be able to use whatever was left. They were adamant there was nothing left so I pushed them aside as we were losing ground against the river and I was just a bit upset that they had lied to me and assured me they knew what they were doing.

I did find fuel in the 55 gallon drum and poured it in a 2 gallon container, the other two containers added a few drops and I had about an inch of fuel in the small container. I primed the engine and used about half of our precious fuel, pulled the choke and yelled, “Vamanos” ..Lets Go…The engine fired off and we had head way, I was yelling, “slowly and keep to the right bank of the river, stay close enough that when it dies we can pull in immediately.” The fuel vanished in a minute and I had just the fuel in the hose; knowing it was moments before the engine died for the last time, I looked up and saw that the operator was following the left side of the river, now I was yelling forward and had to explain why I had told them what I wanted, “WE Have just a moment left and Dos de Mayo is on the OTHER side of the river, when it dies we need to WALK, and I CAN’T walk across the WATER..MOVE OVER NOW!……”. This seemed to cement the issue of leadership and they moved the boat, I yelled again, “When I tell you, turn in to the beach, DO NOT let the boat drift..” Seconds later the last of the fuel was burnt and I yelled forward for them to turn, the engine was slowing and I knew that pulling the choke would give me a couple more seconds, just enough to get to the shore. When we had stopped we were within a half mile or so of the step of point for the trail into Dos de Mayo. 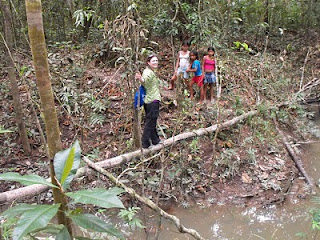 Once in the village we found the church had constructed a guess house and even had a bathroom…. Maybe nothing you would recognize… 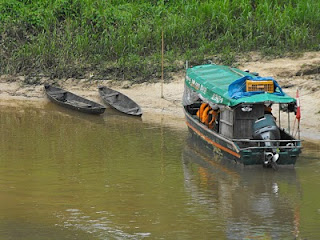 So the next day as the team prepared for the clinic, I hiked the 2 mile to the short wave radio to call out and arrange for a fuel drop. (not as easy as it sounds) I think by the time we had a plan in place to get fuel we were on plan “G”, having worked through the rest of the alphabet.

So here’s how it went:

Radioed Nauta to get hold of the owner of the boat. No one could find him, in the office or at home, worked through 5 phone numbers, no luck…radioed the check point to find our first planned fuel boat to make sure that they are still on the river.

Status; We found our fuel boat at check point 6, they were stalled because of permission; Check point six asked for medical help…my reply, “Fuel here, meds there”. They gave permission for the canoe to proceed to Dos de Mayo…. 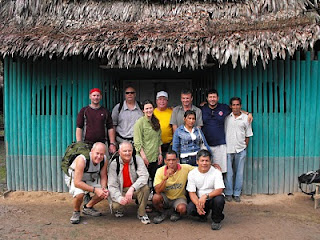 Radioed Santa Rita, gave them 5 phone numbers for the owner of the boat, and the names of two people to relay information to him. No one could reach him.

Radioed San Jose to prepare them for the possible fuel drop and arrange for someone to pick up the fuel and start it up-river. The owner needed to get the fuel on the ferry that day to give us enough time to get it up river so that we can make it out on time.

Radioed Santa Rita had them try all of the phone numbers, no one can get the owner.

Radioed Check point 3 to see if the launch from the university was still there and if we could get fuel from them…the launch left the day before.

Radioed Santa Rita, asked if one of the local venders, “Gustavo’ had any fuel left, he had none but could get some in two day…too long we needed fuel now. Asked him if there was any other fuel in Santa Rita, he said he would check and radio back. Gustavo called back and said he wasn’t sure how much and he would buy everything in Santa Rita and get it started on a canoe to Dos de Mayo as soon as he could.

Status; possibly, we have enough fuel on the way….

Total was 3 hours on the radio and a 4 mile hike in the jungle. My expectation was that we would have the first boat in by 4:30 and it was 5pm when they arrived. Then around 7pm we found out that check point one had radioed up that a canoe had just passed them heading for us with 80 gallons of fuel on board.

Its never easy traveling in the jungle, trusting people and equipment, and changes in plan are the norm. Thankfully no complications so far.