7 days in the jungle now and we leave on Thursday AM aboard the Zucker….40 feet of jungle hardwood fashioned into the general shape of a boat.

I tried everything possible to get my satellite phone to work as a modem as it should and could’nt connect so this report is several days of our trip.. 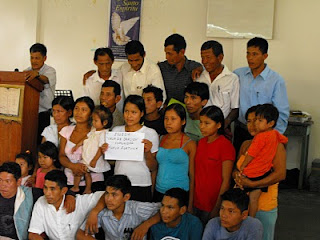 You just never know how these trips will go, group dynamics are the source of lots of studies, “no one returns from the jungle the same as they entered it”. This group has seen that come true, to the person they have found new strengths and insights, or discovered that they were much stronger than they had realized.
The well has been completed and we have a new source of water that is much cleaner and not affected by surface water.
We have about 30 Pastors and Leaders and 180 people attending the seminars here. People have been arriving all night, some as late as 1:00 am. The people from Dos de Mayo paddled a canoe for over a week to get to the seminar…..that’s a 10 hours a day for 10 days ….to learn more of God! We have 19 Villages and 22 churches represented at the seminar. 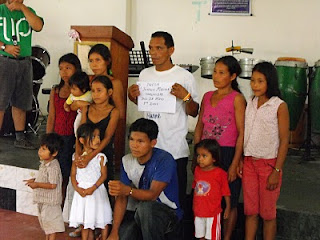 Pastor Jorge and Ruth Arevalo, Pastor Javier, Lucho Rios, Pastor Bob Vance, Carl Angell and myself got together to plan the two days of the seminar, I quickly stepped out of the way and let them go. We ended up with two sessions each morning and afternoon and a service in the evenings. Ruth spoke on women of the bible and sung for us, Jorge cast vision and encouraged the Pastors to new levels of integrity. We had sessions on inductive bible study and the Biblical view of equality in marriage. The evenings were worship and praying for healing. 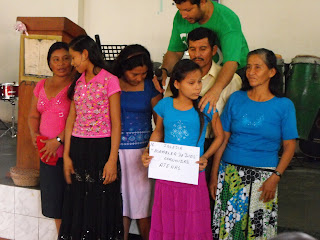 Terry Hunt had all of these jungle Pastors praying for healing over him, as I stood behind Terry touching his back, I prayed with my eyes closed, at one point I’d opened my eyes to look over Terry’s shoulder to see the 26 jungle pastors, arms raised toward Terry, as if the were holding up a wall and shouting to the Lord; interceding for Terry’s health. It was such a powerful image and I could only thank God for these men and feel as if I was in the presence of giants.

The Holy Spirit was not “just” there, but moving in a powerful way, for Terry and in worship. The second night I came into the church just as the second song had started and the power of God was flowing. How can you explain the presence of God? Electric, primal, humbling, mesmerized, powerful, intense, joyful, moving, phenomenal, active, alive, love, expectant; all would have to be in the description but I would still fall short. God was there. 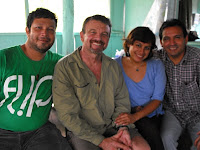 All in all; the seminar went amazingly well. The Church served over 1,200 meals, housed 250 people and each member of the Missionary Church of JungleMaster was involved in some way. We ended by honoring the attending leaders and their communities by bringing them forward, taking photos of their attendees and presenting them with a bible. The seminar went so well that we committed to next year doing a Second Annual “Missionary Festival of the Amazon”  The brothers in the jungle where pumped!
The team is well and without medical issues, the bugs are still biting in the Amazon though. When we arrive in Nauta we will get a bus for the two hour ride to Iquitos and there we will have a much needed real bed.
The Jungle does tend to wear you down bit by bit, almost as if it’s trying to kill you slowly. Nerves begin to fray a bit too. I called my wife Janet on my satellite phone in the midst of one of those moments. All she had to do was hear my voice and she said, “just show grace”. I didn’t need to explain or describe what was going on, she could hear it in my voice.
Its interesting two hours after I wrote this; we were in Iquitos and trying to get our rooms sorted out, we were here a day early and the Hotel was having issues with no rooms, I had figured out rooming arrangements ahead of time but with the issues at the hotel I couldn’t get the rooms needed. Now I had to rearrange rooms based on all the various issues of who snores, male and female, and who’s getting along with whom. I had several people standing over me making various requests, I was dealing with the hotel staff, while surrounded with stacks of luggage, I hadn’t slept much in the last week because I had given up my tent and been sleeping in a hammock because of various issues,…..and I popped of…. Woops, the enemy won and I had forgotten to “just show grace”. A confession or an apology means nothing if you finish it with a “but I..” so I’m sorry, no excuses.
This trip has been challenging for many reasons, Joel and I were talking tonight about how much ground we took for His Kingdom this trip and the enemy won’t give it up easily.

There is so much to tell you, I’ll add stories to this tomorrow…